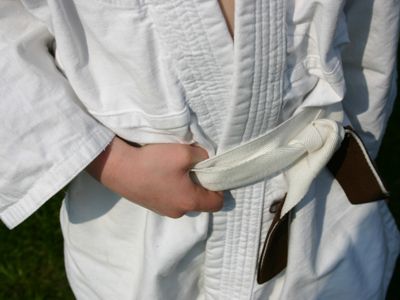 I read with much grimacing an article by Hannah Shaw Grove in Private Wealth Magazine entitled, “Building a Rich Defense.” With all the economic woes facing small business owners, it doesn’t seem reasonable to worry about a deliberate assault. In that article she writes:

Whatever the reason, the fact remains that there is more aggression and anger directed at the wealthy than ever before—aggression that can take the form of vicious and potentially brutal encounters that target the wealth creators themselves, as well as their children.

With all the craziness in the world, I think it is better to teach your children that there really are dragons in the world than to keep them in the dark about such matters. One of the primary defenses is “being perceptive and highly aware.”

A second and equally important aspect is in having confidence to take action.

Perhaps most alarming is the growing risk to children. “Most parents believe there’s an increased possibility of their children being assaulted,” says Chaber, “so they’re looking for self-defense programs that are designed specifically for children, preteens and teenagers.” He believes that the key to working successfully with children is to teach them effective fighting skills that can be learned quickly, so they don’t get discouraged. The massive popularity of mixed martial arts—a combination of boxing, wrestling, Brazilian Jujitsu, Muay Thai and tae kwon do—has reinforced the approach that Chaber has long used in his programs. “For maximum effect, we’ve taken techniques from a variety of martial arts and integrated them into a seamless approach,” says Chaber.

The Karate America programs draw from less mainstream areas such as Silat, Pagamut, Jeet Kune Do and Dim Mak, and the techniques are carefully chosen, then modified for quick mastery. “The moves we teach in these programs are easy to learn and can be highly debilitating, when necessary,” says Chaber, adding that this type of training “empowers kids with the critical skills and confidence they need to deal with an adult attacker.”

More information about Karate America is available at www.karateamericabethel.com.

Part of comprehensive life planning is knowing that very small changes in behavior can have very large effects over time. The confidence of a self-defense class could have just such an effect on empowering you or your family.