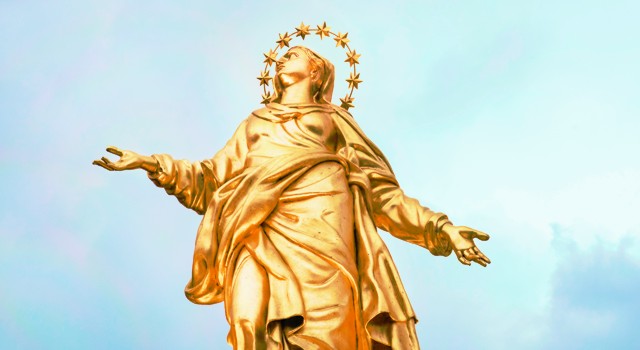 Morningstar Magazine has an interesting article in their February/March 2017 magazine entitled “Rating the Star Rating. ” The study cited raises questions about the worth of the popular rating system used by Morningstar concluding that “the star rating had moderate predictive power during the study period.” Here are the expected cumulative returns for various time periods ranked by the rating funds had at the beginning of the study period: 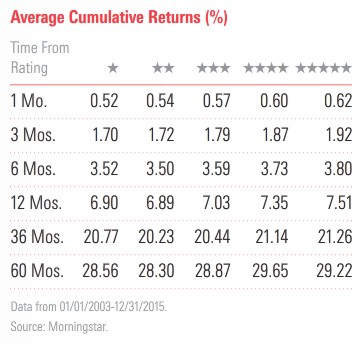 Morningstar Stars are based on a fund’s 1-, 3-, 5-, and 10-year returns. Even 10 years is not long enough to statistically determine a fund’s superior performance. And while mutual funds will continue to tout their 4- and 5-star Morning Star ratings, you should ignore them. Every commission-based mutual fund salesman knows how to build a portfolio of six mutual funds all with an excellent 5-year track record from their company’s family of funds. Having more stars and a good 5-year track record increases sales.

Every 4- and 5-star mutual fund states at the bottom of their advertising that “past performance is no guarantee of future returns” because that statement itself is misleading. It makes it sound like while our past performance which won us a 5-star rating by Morningstar is no guarantee of future results, it certainly is at least loosely correlated enough to increase the likelihood of better future results. But, unfortunately, that is not true.

We have written an article on the more accurate statement, which would read:

I have yet to see a mutual fund company include that statement in their advertising.

To the commission-based mutual fund salesmen, almost every combination of six mutual funds pays them the same commission. It doesn’t matter to them if they were recommending these six funds five years ago since they can always change the funds they recommend in the future. Occasionally they even include one or two low-cost funds. Positioning their company’s funds next to some better-known low-cost funds can help make customers believe that they are being objective in their fund selection. But every one of their financial incentives suggests that they should not be objective.

Unless the advisor is a fee-only fiduciary, the incentives of being compensated more for some products will produce a strong conflict of interest. Even industry leaders cannot seem to tell the difference between fee-only and so-called fee-based advisers who are really fee-and-commission based.

If you want to ensure that your advisor sits on your side of the table, read our article on six ideas to make sure that you aren’t getting ripped off.