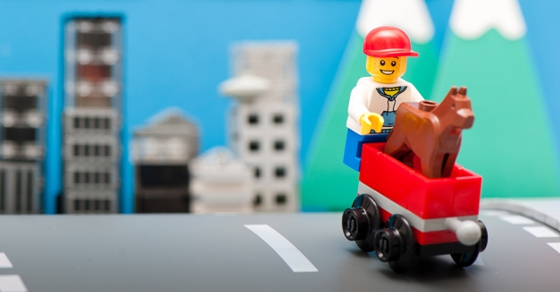 Morningstar’s Don Phillips says that investment stewardship has improved markedly since the 1990s and this is in large part due to the influence of independent financial advisors. This is good news for investors who are entrusting their nest eggs to independent money managers, but what exactly does it mean?

The Dot com crash of 2001 was a defining moment for the wealth management business. During the 1990s, the most risky funds proved themselves irresistibly seductive. Goaded by a mental heuristic bias that turns humans into lemmings, investors chased those returns . Some prudent advisors steered their clients towards globally diversified portfolios while others took the much easier path by adding their oxygen to the already blazing fire.

Phillips suggests that the independent financial advisors helped turn the focus of advising towards the best interests of the client. The same could not be said for those whose commission padded paycheck was given support by media-infused demand for hot stocks. More than any other moment in recent memory, the tech bubble distinguished between those investment firms who nurtured a sales culture and those who emphasized a fiduciary culture.

During the 1980s – 1990s heyday of the broker-dealers and wire houses, Phillips writes that it was common to go to fund industry events and be told that “mutual funds are sold, not bought,” reflecting the belief that investors were sheep to be fleeced rather than owners to be served. The prevailing attitude was that it was a seller’s market and investors’ rights or protections need not be top of mind.

The thriving fund companies of our day are those like Vanguard and Dimensional Fund Advisors (DFA) who built their business culture on creating low-cost highly efficient funds. These companies, and dozens of others, eschewed the idea of paying a commission or any other so called soft-dollar fee to be added to a broker dealer’s select platform.

To aid in this effort to move the financial planning industry towards a fiduciary duty, Morningstar gives fund companies Stewardship grades. Morningstar uses these grades to recognize those fund companies who have a shareholder-centric culture. Fund companies that receive the top scores have low expense ratios and governance structure that encourages the fund managers and executives to keep shareholder interests front and center. Listed here are the scores of fund families that most interest me: 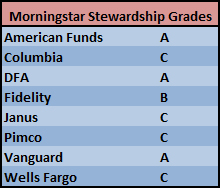 American Funds, DFA and Vanguard all have the highest scores while Columbia (owned by Ameriprise), Janus, Pimco and Wells Fargo have the lowest grades Morningstar offers. Pimco’s score was dinged by what Morningstar viewed as botched board management upon departure of the King of Bonds, Bill Gross. Pimco’s fees are deemed about average but Morningstar points out a suboptimal accounting practice that leaves a question as to whether all fees are fully disclosed in expense ratios.

Wells Fargo loses the most points for their management incentives. Morningstar reports that less than 15% of Wells Fargo contracted money managers makes a significant investment (>$1M) in the funds they manage. A third of their funds are captained by stage coach drivers with no investment at all. This might not be an issue for funds that follow a passive index but it is a big issue for funds that actively manage the precious cargo. Morningstar has found that active managers with a significant investment in the funds they manage outperform those who do not. It is no surprise that managers pay a bit more attention when they have some skin in the game.

These Morningstar Stewardship grades are helpful in ensuring that each fund company is keeping their own house in order but they should go one step further. Fund companies should also be graded by their oversight of the thousands of companies they own on behalf of shareholders. At one time, you could argue that a fund manager’s best feedback is to sell a company that falls short but this is no longer a viable option. Many companies now manage index funds and other broadly diversified investment strategies and have no plans to sell stocks under management. These stock positions become long-term holdings and require oversight. Jack Bogle, founder of the Vanguard Group, uses a chapter in his book The Clash of the Cultures to argue that fund companies are often silent and apathetic on matters that have a direct impact on shareholders. For example, Bogle argues that fund companies should do a better job to encourage independent directors and reasonable executive pay.

Don Phillips sees an industry that has nearly come full circle since the 1940 Investment Company Act which places stewardship at the foundation. Seventy-five years later, it’s encouraging to hear one of the respected leaders of this industry report that independent investment advisors played a leading role in ushering many fund companies back to their intended original design.